The couple, on many occasions, has been spotted joking with each other on social media, to the admiration of their fans and followers.

Just recently, Adekunle Gold got his fans talking after a video from his recent performance made it to the internet.

In the clip, an overzealous dancer attempted to flirt with the singer by jumping on him, but AG Baby resisted her advances and watched her fall to the ground in what seemed like a nasty landing, she wanted to make a second move by climbing on him again, but he stopped her immediately.

On seeing this, Simi reacted to the viral video by commenting on Adekunle Gold’s recent Instagram shirtless photos on his page.

“That’s why they are jumping on you,” she said and told him to wear his shirt.

However, Adekunle Gold replied with a laughing emoji. 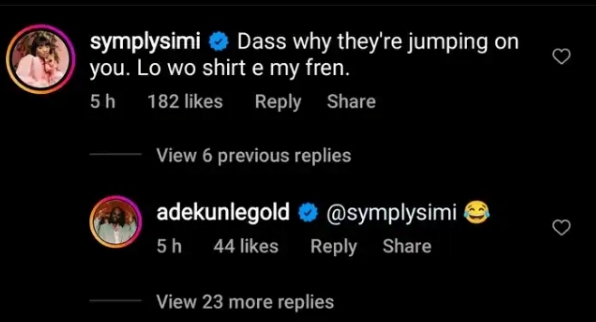 “He Loved The Haircut”: Pretty Female Barber Who Have Barbed Davido Shares Her Amazing Experience

TikTok Influencer with 1.3m Followers Shares Video as She organized Social Event but no one Came