In an open letter to the actress, Yomi showed a screenshot of their first conversation, stating that Bimpe was a fan who he helped into the movie industry without any condition.

Yomi said Bimpe ruined many things since the day he gave her the chance to come into the limelight and was too desperate, instead of being grateful and patient.

He further warned Bimpe to put an end to the social media drama, adding that he never offered her any s*x for a role. Yomi wrote:

I have attached herewith evidence of how conversation started. YOU WERE MY FAN, I HELPED INTO THE MOVIE INDUSTRY without any condition. Clearly you started with LOVE emoji. I don’t deserve any evil from you, it will backfire.”

“Nobody introduced you to me Bimpe, you never ask to be an actress, you didn’t attend my audition(I have video recording of my audition). I wanted you to succeed, I wished you well. You RUINED many things since the day I gave you this chance. You are too desperate instead of being grateful and patient. YOU CAN’T TEAR ME DOWN, YOU WILL ONLY TRY.”

“I NEVER OFFERED YOU or ANY SEX FOR ROLE but it took you many years to speak that truth and when you did, you maneuvered and still want to destroy the LADDER that helped you. If It was sex for role, it means I shagged you to play that LEAD ROLE in the first ever movie that got you noticed.”

“I will rather appeal to you to be bold enough to CALL YOURSELF OUT, CALL OUT those you offered sex in the industry to get to wherever you are and stop defaming me at any slight opportunity. ENOUGH OF THIS NONSENSE/SOCIAL MEDIA DRAMAS.”

“Don’t give SATAN’S CREDIT to GOD. Whatever you earn out of desperacy, lies, deception, sex for role etc, please state it. Enjoy your turkey and let me eat my pomo. You went South, let me flourish in my West. STOP DEFAMING ME!. 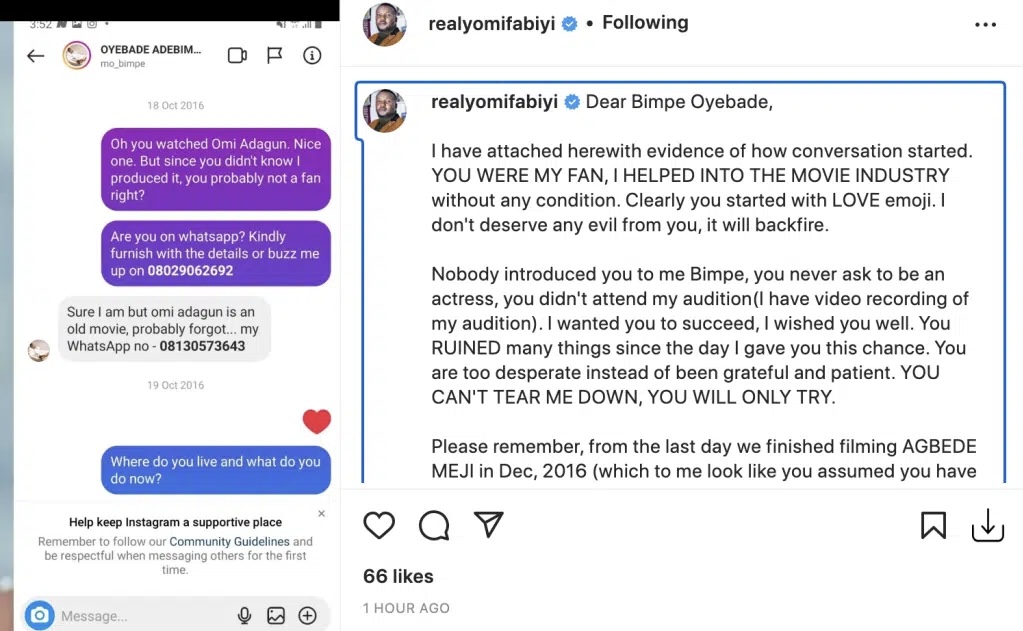 Recall Yomi Fabiyi had earlier reacted to Bimpe Oyebade’s reason for their rift. During a question and answer session on Instagram, Mo Bimpe cleared the air on the s*x-for-role allegation against Yomi.

The actress noted that Fabiyi didn’t ask her out until they had finished shooting the movie, and not before giving her a role.

Replying to a fan’s question, the 28-year-old added that the actor asked for a relationship after their movie shoot.