Social media users have been left at a cross road as Shatta Wale look-alike videos make waves like a raging fire.

Excerpts of the first episode which is the “fake shatta Wale prank” have already leaked online and many can’t get over it.

The purpose of the episode was a deliberate effort to launch the channel and test the public whether they can identify between fake and the real shatta Wale. The show begins by introducing a Shatta Wale look alike whom the host claims to had been picked on the street.

The mimic is then transformed by experts (fashionista, professional Baber, talent managers) into looking, appearing and sounding exactly like the most celebrated dance hall artist in Africa, Charles Nii Ama, known as Shatta Wale.

Shatta look-alike was provided with heavy professional security, moving around town in a long convoy to appear like a rich and famous local celebrity like the S.M boss. The team was spotted around Awoshie, Lapaz and the west hills mall. The experiment achieved its purpose as many people believed and fell for the show displayed; chanting, hailing and crying “Waaale! Waale! Waale l! The video excerpts have gained over 200,000 views across social media even before release.

The Big question is which African celebrity is next to experiment on the show?

Watch the full episode of the fake shatta Wale Prank. 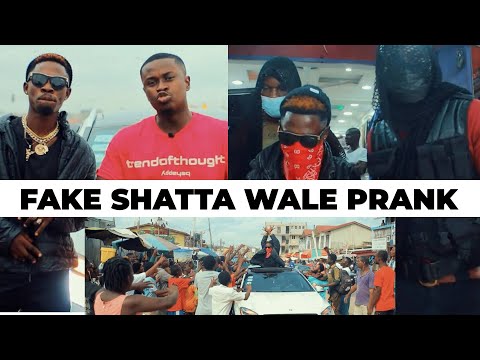