Nollywood star, Angelina Okorie has spoken on what she plans to do to controversial blogger, Gistlover following recent allegations of her involvement with popular Cleric Johnson Suleiman of the Omega Fire Ministries Worldwide.

The 46-year-old screen diva is among the famous actresses who were recently linked with the man of God, by the blog.

Reacting, in an Instagram post asked why the faceless blogger derives so much joy in bringing people down. She went on to question the kind of journalism that’s being practiced by Gistlover.

The mother of one ended by threatening to deal with Gistlover whenever the face behind the controversial blog gets exposed.

“I don’t even know why E never still show him face till now , people are so gullible, how can u believe a faceless bittered person who only derives Joy in bringing people down , what sort of blogging is that, it clearly shows his/her intentions , we actually have a long way to go in this country, make e show him face first May be na gistlover go be the scapegoat wey I Dey find Since” 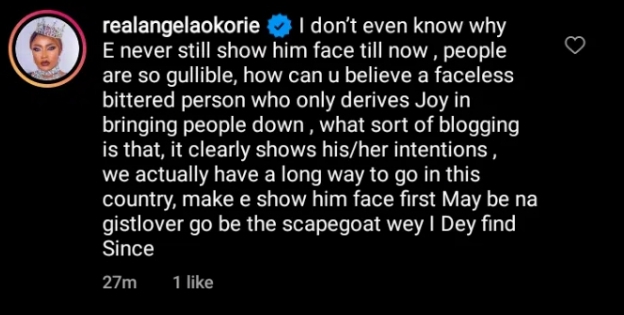