Popular Nigerian Actress, Kiitan Bukola has questioned why many of her colleagues are speaking highly of the controversial clergyman, Apostle Suleman.

Faceless blogger, Gistlover threw many female actresses into fury as the blogger dragged them for having an escapade with the foremost religious leader.

According to the controversial blog, Shan George, Vivian Mitchie, Queen Nwokoye and Georgina Onuoha were some of the celebrities who allegedly had an affair with Suleman.

The movie stars mentioned above have since debunked the allegations.

Georgina asserted that she defended the Apostle because he helped her when she was in need.

Shan George, on her part, said the Apostle is one of the kindest and most straightforward persons she knows.

Queen described him as a good man and she would never sleep with a preacher, adding that God and posterity would judge her.

Reacting in the comment section of Linda Ikeji’s blog, Kiitan Bukola questioned why many of them were speaking highly of him.

The Actress further questioned the essence of debunking the news if he was a good man.

Kiitan pointed out how someone can be good to a particular person and still be bad to another.

“Why is everyone particular about saying he is a good man he is a good man while debunking… GOD knows best… One thing I know is someone can be good to you and still be bad to another person”. 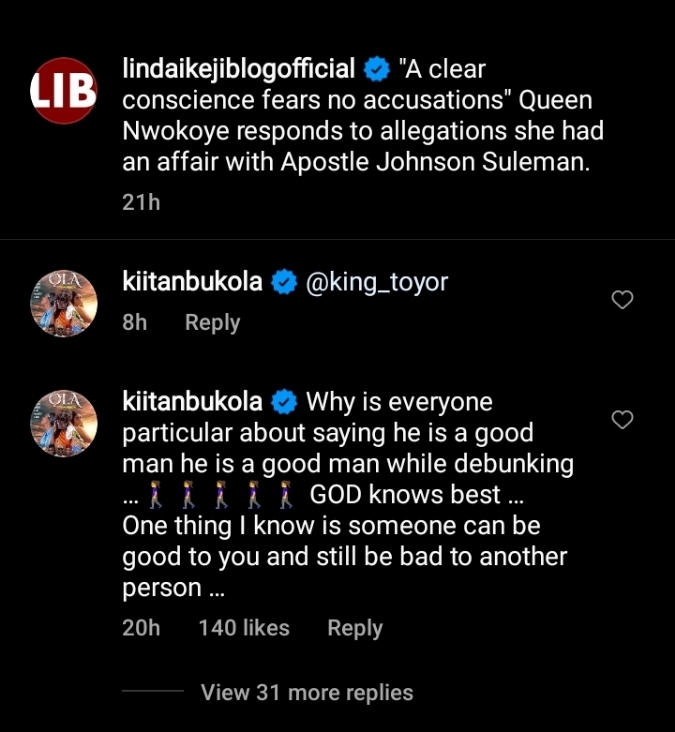